Future at risk: A study on the Club of Rome

Future at risk: A study on the Club of Rome 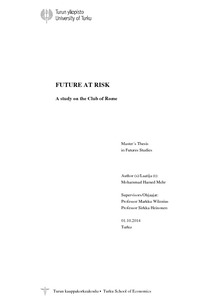 Sustainability, in its modern meaning, has been discussed for more than forty years. However, many experts believe that humanity is still far from being sustainable. Some experts have argued that humanity should seek survivable development because it is too late for sustainable one, since 1990s. Obviously, some problems prevented humanity from becoming sustainable. This thesis focuses on the agenda of sustainability discussions and seeks for the essential topics missing from it. For this purpose, the research is conducted on 21 out of 33 books endorsed by the Club of Rome. All of these books are titled ‘a report to the Club of Rome’. The Club of Rome is an organization that has been constantly working on the problems of humankind for the past 40 years. This thesis has three main components: first, the messages of the reports to the Club of Rome, second, academics perceptions of the Club, and third, the Club member perceptions of its evolution, messages and missing topics. This thesis investigates the evolution of four aspects in the reports. The first one is the agenda of the reports. The second one is the basic approaches of the Club (i.e., global, long-term and holistic). The third one is the ways that the reports treat free market and growth ideology. The fourth one is the approach of the reports toward components of the global complex system (i.e., society, economy and politics). The outline of the thesis is as follows. First, the original reports are briefly summarized. After this, the academic perceptions are discussed and structured around three concepts (i.e., futures studies, sustainability and degrowth). In the final step, the perceptions of the experts are collected and analysed, using a variation of Delphi method, called ‘in-depth interviews’, and ‘quality content analysis’ method. This thesis is useful for those interested in sustainability, global problems, and the Club of Rome.

This thesis concludes that the reports from 1972 up to 1980 were cohesive in discussing topics related to the problems of humankind. The topics of the reports are fragmented after this period. The basic approaches of CoR are visible in all the reports. However, after 1980, those approaches and especially holistic thinking are only visible in the background. Regarding the free market and growth ideology, although all the reports are against them, the early reports were more explicitly expressing their disagreement. A milestone is noticeable around 1980 when such objections went completely to the background. However, recent reports are more similar to those of 1970s both in adopting a holistic approach and in explicitly criticizing free market and growth ideology. Finally, concerning the components of global complex system, the society is excluded and the focus of the reports is on politics, economy and their relation.

Concerning the topics missing from the debate, this thesis concludes that no major research has been conducted on the fundamental and underlying reasons of the problems (e.g. beliefs, values and culture). Studying the problems without considering their underlying reasons, obviously, leads to superficial and ineffective solutions. This might be one of the reasons that sustainability discussions have as yet led to no
concrete result.