Collective Memory Embodied in Poetry as Poison. The Mnemonic Role of Romantic Poets Discussed on the Basis of Adam Mickiewicz’ Konrad Wallenrod and Forefathers (Part III) 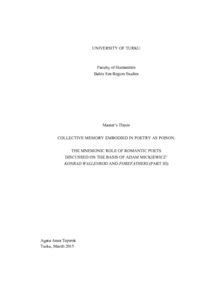 This thesis constitutes an interdisciplinary approach to the Polish Romanticism combining literature studies with memory studies, nationalism research and psychoanalysis. This phenomenon-based study attempts to answer the question, how the Polish national poet Adam Mickiewicz (1798–1855) – or more exactly the implied authors in his works – perceived the role of poetry in mnemonic terms and how it changes in course of time. Consequently, ‘memory in literature’ (Astrin Erll and Ansger Nünning) is discussed here.

Two pieces of writing by Mickiewicz – Konrad Wallenrod [1828] and the third part of Forefathers [1832], where a bard respectively a poetic genius appears – are seen as meta-texts defining goals of poets in time of the political non-existence of a state. Poetry is supposed to keep memory of the glorious past alive, kindle the love for the motherland, support the collective identity of a group and initiate a liberation movement. Poets function as memory guards, leaders of the nation and prophets. Thus, literature is a medium of collective memory – it stores crucial contents, transmits them and acts as a cue.

Nevertheless, shifting the focus from the community towards well-being of individuals, which is consistent with the postmodern thinking, the impact that poetry has on members of a given memory culture (Jan Assmann) can be described in ‘vampiric’ terms (Maria Janion). Poetry embodying collective memory may be compared to ‘poison’, ‘infecting’ people with a nationalistic way of thinking to their disadvantage as far as their personal lives are concerned.