Social class as a factor for the construction of a musician’s identity : The Musician’s social background and identity questionnaire (MSBIQ) – a cross-sectional comparative quantitative online survey research study of music students at two higher education institutions in Finland 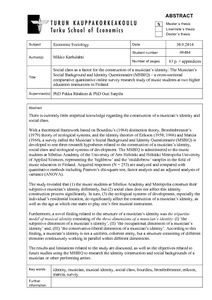 There is currently little empirical knowledge regarding the construction of a musician’s identity and social class.

With a theoretical framework based on Bourdieu’s (1984) distinction theory, Bronfenbrenner’s (1979) theory of ecological systems, and the identity theories of Erikson (1950; 1968) and Marcia (1966), a survey called the Musician’s Social Background and Identity Questionnaire (MSBIQ) is developed to test three research hypotheses related to the construction of a musician’s identity, social class and ecological systems of development. The MSBIQ is administered to the music
students at Sibelius Academy of the University of Arts Helsinki and Helsinki Metropolia University of Applied Sciences, representing the ’highbrow’ and the ’middlebrow’ samples in the field of music education in Finland. Acquired responses (N = 253) are analyzed and compared with quantitative methods including Pearson’s chi-square test, factor analysis and an adjusted analysis of variance (ANOVA).

The study revealed that (1) the music students at Sibelius Academy and Metropolia construct their subjective musician’s identity differently, but (2) social class does not affect this identity construction process significantly. In turn, (3) the ecological systems of development, especially the individual’s residential location, do significantly affect the construction of a musician’s identity, as well as the age at which one starts to play one’s first musical instrument.

The results and limitations related to the study are discussed, as well as the objectives related to future studies using the MSBIQ to research the identity construction and social backgrounds of a
musician or other performing artists.