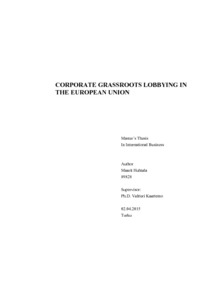 The European Union has gone through significant changes in the past 20 years. The importance of
public opinion in politics has increased and the new technologies are empowering the wider public
to express its opinions. The purpose of this study is to explore how corporations use the tactic of
grassroots lobbying in the European Union environment. The research objectives were addressed
through qualitative research methods. Six expert interviews were conducted to find new
perspectives and to deepen the understanding of the research objectives. Following the data
collection, the research material was transcribed and analysed. In the analysis, the data was
organized based on concepts and themes found from the literature review.
The empirical findings on grassroots lobbying in the EU were presented. It was found that when
a company is selecting grassroots lobbying tactic, the familiarity of the tactic, organizational
culture, financial resources and amount of stakeholders seem to have an impact to the selection. The
issues that are successfully lobbied through the grassroots-lobbying tactic were seen to be those,
which have high and direct impact on lives of people, arouse strong feelings and are not very
complex. Furthermore, when deciding on the timing of a campaign, in the EU it was found that a
company should take into account the long policy process and limited capabilities to mobilise
people. Targeting the object of the campaign and selecting the channels used in a grassroots-
lobbying campaign were seen to be in function of identifying the key decision-makers on the issue.
The decisions of who to mobilise and the mobilisation channels were considered to be dependant on
who the campaign is trying to influence. Also, it was found that when the implementing a grassroots
lobbying campaign in the EU environment, the special features such as multiple cultures and
languages should be taken into account. This study has provided novel practical insights for
corporate grassroots lobbying in the EU environment and furthermore successfully contributed to
the academic research in the field.