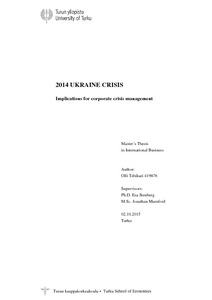 In the late year 2013 events started to unfold in Ukraine’s capital city Kiev that would change the
political and economic environment of the EU and Russia. The tension had been building for years
between the two parties with Ukraine in the middle and during 2014 the tension blew up and events
started to escalate into a crisis, which we now know as the 2014 Ukraine crisis. The crisis would
include political, economic, and even military actions by all the parties involved with Ukraine
slipping close to civil war. Both political and economic hardships followed for others as well with
both the EU and Russia placing heavy political and economic sanctions on each other. Most notably
in terms of this paper, the Russian federation placed total import embargo sanctions on food imports
from the EU and some other countries. This meant that a Finnish dairy company, Valio, had to
engage in corporate crisis management as almost a fifth of its total revenue was cut in a heartbeat.
Valio had been prepared for some kind of complications with their Russian market as events started
to unfold in Ukraine in the beginning of 2014 but never did they suspect that a complete shutdown
of the Russian market would follow. The company is still recovering after more than a year after the
sanctions were posed and have not been able to supplement the lost revenue streams. This research
is a qualitative research aiming to find answers to the main questions: 1) What is the 2014 Ukraine
crisis and what kind of special implications does it have and 2) How did the crisis affect Valio and
how did Valio fare in its crisis management efforts. The data has been collected both from
secondary document sources and primary sources. The main findings of this research are that the
political and economic environment of the EU and Russia has gone through a profound change
during the years 2013-2015. The companies and governments should re-evaluate what kind of
environment they are now facing and what kinds of risks the new situation poses. This also calls for
a deep academic analysis from the academic community. In corporate crisis management of Valio
the main findings are that the former literature has looked into crisis management as one-time
occurrence but the new crises and global events would call for a more on-going crisis analysis and
active crisis management. Thus, corporate crisis management should be viewed as a cycle. Valio
specifically handled the situation surprisingly well, considering that their revenue was indeed cut by
a fifth. The main aspects of crisis management, which Valio did not handle as well, concern the
learning curve of crisis management. They could be doing more in order to prepare for future crises
better by learning from this experience. The situation is then still on-going in the autumn 2015 both
in Ukraine and within Valio.