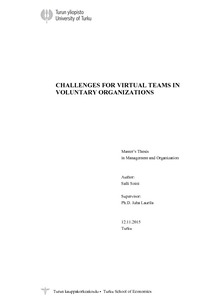 This research concerns virtual teams in the field of volunteer work. The developments in the area of information and communication technology have decreased their costs and made them easily accessible. As a result, it seems natural that also the voluntary organizations have adopted online tools and virtual teams as a part of their work modes. However, virtual teams have not received much research in this context, and one of the goals of this study was to begin closing that gap. The research had two main focus areas: the challenges that the volunteers face in the teams, and the leadership that the teams have.

The study used a qualitative approach and semi-structured interviews. The interviews were conducted over Skype and email and included members from six different teams. The case organization was a European-wide student organization that widely utilized virtual teams in its work.

The study identified three critical issues for managing the virtual teams. The first challenge was creating common ground for teamwork through electronic communication. Secondly, volunteering created challenges for the teams through variations in the level of commitment of the members, as some left the organization during the term of the team. Lastly, knowledge transfer was a challenge that came from changing the team members regularly each year. As for the second key topic, leadership in the teams was spread among the team members unevenly. The teams had a formal leader, but they exhibited signs of shared leadership, and the team members were able to influence the team through their own level of involvement. Especially the experience that a member had contributed the amount of influence she held.

All in all, the challenges that the volunteers faced were similar to those of normal virtual teams. Volunteering brought additional challenges through the varying levels of commitment and the changing of the team members. Additionally, the role of the team leader was not as firm. The results of the study can be applied to other volunteer organizations that utilize virtual teams.