Implementation of educational change in Finland: The case of the undivided basic education reform 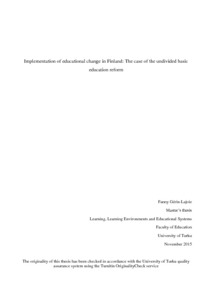 For the past decades, educational large-scale reforms have been elaborated and implemented in many countries and often resulted in partial or complete failure. These results brought researchers to study policy processes in order to address this particular challenge. Studies on implementation processes brought to light an existing causal relationship between the implementation process and the effectiveness of a reform. This study aims to describe the implementation process of educational change in Finland, who produced efficient educational reforms over the last 50 years. The case study used for the purpose of this study is the national reform of undivided basic education (yhtenäinen peruskoulu) implemented in the end of the 1990s. Therefore, this research aims to describe how the Finnish undivided basic education reform was implemented. This research was carried out using a pluralist and structuralist approach of policy process and was analyzed according to the hybrid model of implementation process. The data were collected using a triangulation of methods, i.e. documentary research, interviews and questionnaires. The data were qualitative and were analyzed using content analysis methods.

This study concludes that the undivided basic education reform was applied in a very decentralized manner, which is a reflection of the decentralized system present in Finland. Central authorities provided a clear vision of the purpose of the reform, but did not control the implementation process. They rather provided extensive support in the form of transmission of information and development of collaborative networks. Local authorities had complete autonomy in terms of decision-making and implementation process. Discussions, debates and decisions regarding implementation processes took place at the local level and included the participation of all actors present on the field. Implementation methods differ from a region to another, with is the consequence of the variation of the level of commitment of local actors but also the diversity of local realities. The reform was implemented according to existing structures and values, which means that it was in cohesion with the context in which it was implemented. These results cannot be generalized to all implementation processes of educational change in Finland but give a great insight of what could be the model used in Finland. Future studies could intent to confirm the model described here by studying other reforms that took place in Finland.