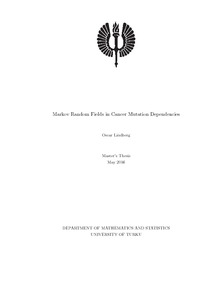 Even though a large amount of evidence would suggest that PP2A serine/threonine protein phosphatase acts as a tumour suppressor the genomics data to support this claim is limited. We fit a sparse binary Markov random field with individual sample's total mutational frequency as an additional covariate to model the dependencies between the mutations occurring in the PP2A encoding genes. We utilize the data from recent large scale cancer genomics studies, where the whole genome from a human tumour biopsy has been analysed.

The mutations occurring in the set of genes suggested by our results has been shown to contribute to the transformation of human cells. We conclude that our evidence further supports the claim that PP2A acts as a tumour suppressor and restoring PP2A activity is an appealing therapeutic strategy.