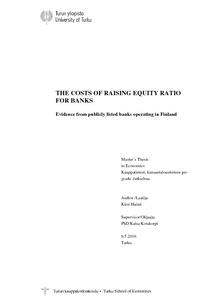 The solvency rate of banks differs from the other corporations. The equity rate of a bank is lower than it is in corporations of other field of business. However, functional banking industry has huge impact on the whole society. The equity rate of a bank needs to be higher because that makes the banking industry more stable as the probability of the banks going under will decrease. If a bank goes belly up, the government will be compensating the deposits since it has granted the bank’s depositors a deposit insurance. This means that the payment comes from the tax payers in the last resort. Economic conversation has long concentrated on the costs of raising equity ratio. It has been a common belief that raising equity ratio also increases the banks’ funding costs in the same phase and these costs will be redistributed to the banks customers as higher service charges. Regardless of the common belief, the actual reaction of the funding costs to the higher equity ratio has been studied only a little in Europe and no study has been constructed in Finland. Before it can be calculated whether the higher stability of the banking industry that is caused by the raise in equity levels compensates the extra costs in funding costs, it must be calculated how much the actual increase in the funding costs is. Currently the banking industry is controlled by complex and heavy regulation. To maintain such a complex system inflicts major costs in itself.

This research leans on the Modigliani and Miller theory, which shows that the finance structure of a firm is irrelevant to their funding costs. In addition, this research follows the calculations of Miller, Yang ja Marcheggianon (2012) and Vale (2011) where they calculate the funding costs after the doubling of specific banks’ equity ratios. The Finnish banks studied in this research are Nordea and Danske Bank because they are the two largest banks operating in Finland and they both also have the right company form to able the calculations. To calculate the costs of halving their leverages this study used the Capital Asset Pricing Model. The halving of the leverage of Danske Bank raised its funding costs for 16—257 basis points depending on the method of assessment. For Nordea the increase in funding costs was 11—186 basis points when its leverage was halved.