International Money Laundering and Its Prevention in the Banking Sector

International Money Laundering and Its Prevention in the Banking Sector 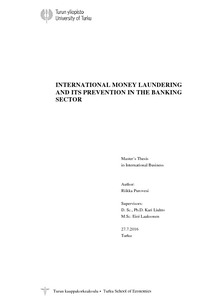 The research was conducted as interviews with four experts working either in trade finance, compliance, national crime investigation or banking supervision. The aim was to include views from different stages from the anti-money laundering chain. These interviews were conducted as theme interviews and the analysis compared the perceptions from the interviewees to the current available literature and studies.