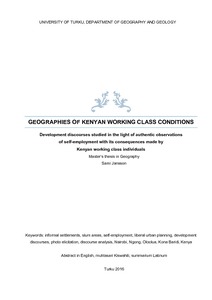 Working class conditions are discussed in many development reports focusing on Kenya’s poverty issues and they often emphasise the need to upgrade the living conditions present in working class residential areas. It is a fact that slums burgeon in most urban areas of the world and that different theories explain why they exist. This study reviews academic theories of informally built settlement formations including the bid rent theory by von Thünen, variations of liberal theories, as well as neoconservative and neo-Marxian approaches. The second part of this study is based on authentic first-person accounts provided by Kenyan working class individuals.

The field work of this study involved a photo elicitation routine in which a group of informants were asked to provide photographs of urban (or rural) sites they found significant. Afterwards the informants were in semi-structured theme interviews asked to explain what features their pictures reveal about the working class life in Kenya. The information thus produced was then examined by carrying out a discourse analysis to identify and indicate how personal experiences of the Kenyan informants are reflected in their accounts of working class life in Kenya. Studies of working class conditions in Kenya in which local workers are asked to form freely a personal point of view before theme interviews are conducted do not exist.

Results show that Kenyan workers identify two means of subsistence: hustling or being in a secure position. The values and ideas underlying formal urban planning discourses cannot directly be identified in the accounts of the informants. By their narratives and photographs the informants show how they experience and what they think about self-employment. They tell us what they as local residents pay attention to while they attempt to open a window for us to the Kenyan working class life.