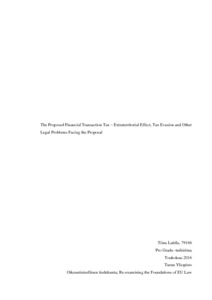 The main topic of this master’s thesis is the proposed EU directive on a financial transaction tax. Ten Member States which want to enact the directive by using enhanced cooperation are currently negotiating the contents of the proposal. This tax would be levied on specific products which are traded on the financial markets. As an example the transaction of stocks would be taxed at a percentage of 0.1 percent, and the transaction of derivatives at a percentage of 0.01 percent.

The proposed financial transaction tax would enter into force in said ten countries but it would still have effects on those countries, which are not planning on participating in this taxation system. This is one of the main reasons why this tax has faced a lot of opposition in several European Union countries. The main legal problems the tax is predicted to have are tax evasion, double taxation, and extraterritorial effect.

The planning of the financial transaction tax began already in 2011 when the Commission published the first draft of the proposal. Following this the proposal was last amended in 2013, but the participating Member States are currently still negotiating the contents of the proposal. The participating Member States published a statement in December 2015 in which they promised that there will be a decision made about the financial transaction tax by the end of June 2016.