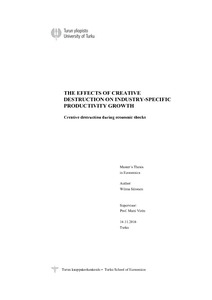 Productivity in Finland has been extremely stagnant since the Great Recession. This thesis studies the dynamics of industry-specific microstructural changes in labor productivity, focusing on four different productivity shocks including the opening to international trade and of capital markets that lead to a productivity shock in the mid-1980s, the early 1990s depression, the dot com bubble in the turn of the millennial and the Great Recession. Creative destruction is a mechanism in which resources inside an industry are reallocated in a more productive way due to non-viable firms exiting and more productive businesses entering the market as well as changes in the labor productivity shares of firms. The underlying theoretical framework is based on Schumpeterian new growth theory. The study seeks to find out whether the creative destruction process accelerates during economic downturns like theory suggests, and how the structure of labor productivity growth varies in time and in different sectors. The aim is also to determine the nature of the industries in terms of creative destruction, classifying the sectors accordingly. An empirical shift-share analysis is conducted using data that is decomposed according to the geometric Diewert–Fox decomposition method. The data covers years 1975–2011 and is micro level firm statistics on the Finnish manufacturing sectors. The analysis focuses on the so-called between component, which is considered as the most accurate measure for creative destruction. Among the four shocks studied, the Great Recession showed to have triggered most creative destruction as measured by a positive between component and net entry effect. In comparison, the 1990s recession triggered structural change to a lot smaller extent. Economic downturns appear to enhance creative destruction in certain sectors, but generally not in all manufacturing sectors simultaneously. To determine the nature of the industries studied, the sectors are classified both according to their R&D-, capital- and labor-intensity as well as according to their dependence on either domestic or export demand. Structural change seemed to be best associated with the R&D-intensive sectors and least with capital but not R&D-intensive sectors. Labor-intensive sectors fell between the two, with a significant net entry in common. Since the results varied among the sectors in each of the groups, and an optional classification was thus proposed. Domestic demand, measured as consumption growth, explained productivity growth only in one industry, whereas export growth appeared to explain the productivity growth in all other sectors. Many of the export-dependent sectors also experienced lots of creative destruction, except for the export-dependent industries also capital-intensive with little R&D, which did not seem to profit from creative destruction. The alternative classification sheds light on the differences among the sectors. While different sectors suffered productivity losses during different productivity shocks, the industries that most suffered in the Great Recession were also export-dependent. On the other hand, the domestic demand dependent sector actually saw its labor productivity increase under the same period. In addition, the increasing positive contribution of net entry indicates that the ’destructive’ effect of creative destruction is lately on the rise, and could significate that the creative destruction process continues as strong also in the 2010s.