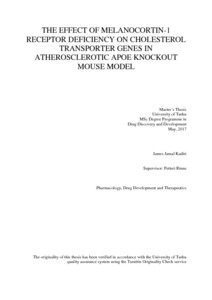 The melanocortin system comprises of melanocortin peptides; α-, β- and γ- melanocortin stimulating hormones (MSH) and adrenocorticotropic hormone (ACTH) derived from the proteolytic degradation of pro-opiomelanocortin (POMC) prohormone. These hormones regulate important physiological processes such as skin pigmentation, energy expenditure and food intake as well as exocrine and inflammatory activities amongst other functions. Biological activities of melanocortins occur via the activation of five melanocortin receptors (MC1 – MC5). MC1 receptor is activated by α-MSH and plays an important role in inflammatory activities. Recent studies revealed that the activation of MC1-R in macrophages reduces cholesterol uptake and promotes cholesterol efflux. Against this background, we hypothesised that MC1-R deficiency leads to decreased expression of reverse cholesterol transport (RCT) genes and consequently, impact the process of RCT. In this study, we investigated the transcriptional regulation of cholesterol transporter genes (ABCA1, ABCG1, ABCG5, ABCG8, SR-B1, SR-A1 and CD36) in wild type (WT) and MC1 receptor deficient (MC1-Re/e) mice on ApoE knockout background as well as the effect of high fat diet (4 weeks) in the two genotypes. The RNA from aorta, liver, spleen and bone marrow of the mice was extracted, converted to cDNA and then quantified with real-time polymerase chain reaction (qPCR) for the selected genes. We also conducted in vivo cholesterol efflux assay by loading tritiated cholesterol into bone marrow-derived macrophages and intraperitoneally injected them into WT and MC1-Re/e mice. Twenty-four to forty-eight hours after the injection, radioactivity accumulation of H3-cholesterol in the plasma, liver and feces was measured. We observed that crucial cholesterol transporter genes; ABCA1 and ABCG1 were downregulated in the aorta of MC1-Re/e mice, ABCG5 and ABCG8 expression in the liver of this group of mice were also reduced, an effect exacerbated by diet rich-in high fat. Generally, the cytokines and adhesion molecules (IL-1β, IL-6, CCL-2, CD62P etc.) analysed from the aorta of the MC1-Re/e mice were significantly reduced compared to WT mice. The cholesterol efflux assay showed no major differences between the genotypes in terms of cholesterol efflux capacity. In conclusion, MC1-R deficiency in ApoE knockout mice resulted in reduced expression of RCT genes particularly in the aorta and liver, which might hamper the efficiency of RCT process.