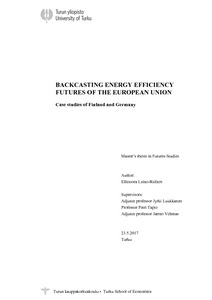 Due to megatrends, such as climate change and population growth, energy issues have become very important in political discussion. In addition to energy savings, and the use of different energy sources, energy efficiency – consuming less energy to produce the same or more value – is an essential matter, and one of the important goals for the European Union. In this thesis, the targets of the EU 2020/2030 agreements – decreasing energy efficiency 20% by 2020 and 27% by 2030 compared to 1990 – have served as a preferred future vision for energy efficiency exploration. Finland and Germany were chosen as case countries for this thesis, because of their interesting, but different energy policies. Both forecasting and backcasting scenario techniques were utilized to see whether these countries will reach the set energy efficiency targets of the EU by 2020 and 2030. Also, Environmental Kuznets Curve (EKC) hypothesis and de-linking energy consumption from GDP growth were examined to get better understanding of energy efficiency. Five future scenarios – business-as-usual BAU, industry, service, non-renewable, and renewable – were created for both countries by using LINDA accounting framework model. In addition, three intensity scenarios were conducted for Finland and Germany. All of the scenarios were based on the historical data as well as future visions, strategies, and plans of the countries. In this thesis, all the scenarios of Finland and Germany reached the EU 2020/2030 energy efficiency targets. The service and renewable scenarios had the best efficiency figures, whereas the industry and non-renewable scenarios had lower efficiencies than BAU scenario. The EK-Curve did not occur in Finland BAU, but it did appear in Germany. In Finland, de-linking energy consumption from economic growth was weak, whereas in Germany, de-linking appeared to be strong. Because of the challenges in interpreting the several energy efficiency targets, more convenient and coherent ways are needed for measuring. Even though the efficiency targets of the EU are good in trigger action, there might be a need for even more strict targets. Backcasting, the EKC hypothesis and de-linking could be further studied in the light of energy efficiency.