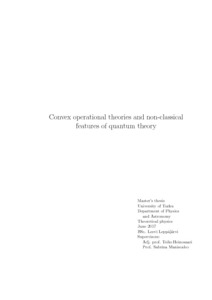 This thesis serves to introduce the mathematical concepts related to convex operational theories and then use them to construct this class of theories in the ordered vector space formalism. We use the constructed class of theories to consider the most important aspects of the theories with applications in physical theories such as quantum theory. We study some of the most important non-classical properties of quantum theory in the more abstract framework of convex operational theories including original research on one of these features.