Combination of Metformin and Inorganic Nitrate: Effects on Metabolic Disease and Lactic Acidosis 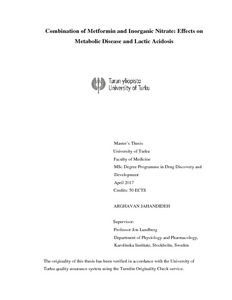 Nitric oxide (NO) is a diatomic gaseous molecule generated in our bodies by enzymes known as NO synthases. More recently another pathway for generation of NO has been delineated in which dietary or endogenous inorganic nitrate and nitrite are metabolized to form NO. Dietary supplementation with nitrate has proven beneficial for a number of disorders e.g. by improving metabolic function and lowering blood pressure, making it an attractive novel drug candidate in metabolic and cardiovascular disease. Besides utilizing direct therapeutic effects of nitrate itself, another attractive option might be to combine nitrate with another drug in order to increase the overall effect or reduce the side effects of the other drug.

The aim of the proposed thesis was to determine whether simultaneous acute administration of a low dose of metformin and nitrate can act synergistically to improve metabolic functions and decrease blood glucose level in a metabolic syndrome genetic mouse model (A2BKO mice) and also if this combination can prevent lactic acidosis produced by metformin in rats.

The results showed that both nitrate and metformin alone had a beneficial effect on glucose tolerance but there was no clear synergistic effect to decrease blood glucose levels. We speculate that the lack of synergy may be due to their same mechanism of action in targeting NADPH oxidase and AMP-activated protein kinase. However, the glucose disposal was better in metformin and nitrate combination group compared to metformin group. Moreover, in separate experiments we found that acute administration of nitrate had no impact on prevention of lactic acidosis induced by high dose of metformin in rats. However, future chronic studies are necessary in order to ameliorate our knowledge of the proposed combination mechanism.