Relationship between socio-economic backgrounds and secondary school students’ achievements and self-beliefs: A comparative study of Finland and Singapore

Relationship between socio-economic backgrounds and secondary school students’ achievements and self-beliefs: A comparative study of Finland and Singapore 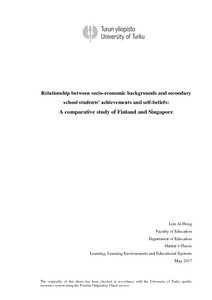 This thesis explores whether the achievement and self-beliefs of secondary school students are related to their socio-economic background in two different national contexts, Finland and Singapore. Both countries have a predominantly public school system and provide a high standard of national education, as evident in the strong PISA performances. However, high stratification is present in Singapore’s education system, with students being selected into different academic streams while such differentiation is not present in Finland’s comprehensive system.

This comparative study uses 2012 PISA data. The sample consists of 15-year-old Finnish (n = 8829) and Singaporean (n = 5546) secondary school students – from 311 and 172 schools sampled in Finland and Singapore respectively – who participated in 2012 PISA. The PISA Index of economic, social and cultural status (ESCS) was used as a measure of socio-economic background while mathematics test-score plausible values were used as a measure of achievement in this study. Using students’ responses to 25 scale-items of the questionnaire, self-beliefs were measured through four dimensions: ‘perceived self-efficacy’, ‘perceived self-concept’, ‘perceived controllability (internal)’ and ‘perceived controllability (external)’.

In this study, quantitative analysis was conducted. Besides principal components analysis (PCA) of the questionnaire scale-items, the relationships between the variables socio-economic background, achievement and self-beliefs were investigated using one-way analysis of variance (ANOVA) and multiple regression analysis.