Predicting Consumers’ Purchase Intentions for Sex Toys : An Application of the Theory of Planned Behavior

Predicting Consumers’ Purchase Intentions for Sex Toys : An Application of the Theory of Planned Behavior 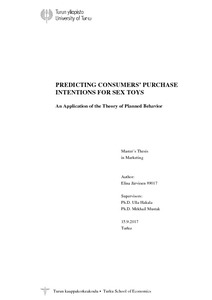 The sex toy market has been in a turmoil for the last decades. The more liberal attitudes towards sex-related issues and the possibility to buy sex toys anonymously online, have contributed to the growth of the sex toy industry. The purpose of the thesis was to investigate factors that predict consumer purchase intentions for sex toys using the theory of planned behavior as a theoretical framework. The following research questions were presented: What are the beliefs that consumers have about purchasing sex toys? To what extent do attitude, subjective norm, perceived behavior control, and past purchase behavior predict purchase intentions for sex toys? How do high purchase intention and low purchase intention groups vary according to demographic characteristics?

A sequential mixed methods research design was adopted for the empirical part of this study. The qualitative research included expert interviews and a belief elicitation study. Expert interviews (N=2) were conducted in order to better understand the phenomenon. A belief elicitation study (N=42) was conducted to find out the salient beliefs of the consumers regarding the purchasing of sex toys. For the quantitative part of the study, the findings from the qualitative research were applied to form a survey questionnaire. An online survey, with a nationally representative random sample (N=521) of respondents aged 18–65 years, was conducted in Finnish in Webropol.