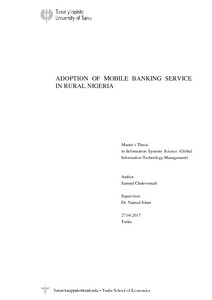 World bank report states that the percentage of adults without bank accounts fell from 49 % to 38% between 2011 and 2014. This trend is largely driven by the increase in account ownership in developing countries. Despite the decreasing trend, about two billion adults in the world are still without bank accounts and majority of them reside in rural areas. Addressing this issue requires more research to evaluate the barriers to adopting mobile banking in the context of rural areas.

This study examines the factors that influence adoption of mobile banking in rural areas from Nigeria’s perspective. It adapts the technology acceptance model (TAM) to examine rural people’s intention to use the service in the future. The model hypotheses constitute that perceived usefulness, perceived convenience, perceived economic cost and perceived trust are predictors of future usage intentions. Data was collected through administered questionnaires to village residents in the northern part of Nigeria. Based on 186 validated responses, Partial Least Squares (PLS) techniques were used to examine the model.

The results in this study indicate perceived convenience and trust as factors that influence on usage intentions although convenience was significantly higher. Perceived usefulness and perceived economic cost were not found to be significant factors. In addition, demographic information about the respondents shows that majority of them are unaware of mobile banking services.

Theoretical implications of this study suggest the explanatory power of the primary TAM model is limited in examining adoption mobile banking within a largely unbanked population. To relevant practitioners in Nigeria, it suggests more awareness is needed in rural areas about the convenience that mobile banking provides, the affordable cost in using it as well as the ease of opening bank account. Further implications are discussed in the conclusion chapter.