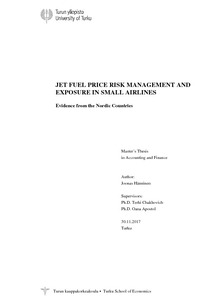 Fuel and labour costs represent the two largest items for airlines’ operating expenses. During the 2000s fuel has shifted to largest operating expense item over labour for airlines. The shift has been due to increase in fuel prices, increased competition resulting from deregulation, and increasing labour productivity, among others. Commodity prices are highly volatile and, therefore, exhibit a significant source of risk for non-financial firms. As jet fuel is distilled from crude oil, volatile fuel prices affect the airline industry’s profitability, and cutting other expenses has further increased the sensitivity. Airlines, however, can try to mitigate this jet fuel price risk by hedging with derivatives instruments. Previous literature has mostly studied commodity prices impact on firm value for large companies, especially in the U.S. and Europe. Commodity price exposure, however, is much less studied especially for airlines. The aim of the thesis is to study to what extent the listed airlines in the Nordic countries, which are small in size, are exposed to jet fuel price risk and how they hedge against this commodity price risk between 2006 and 2014. To the knowledge of the author, the thesis is the first to study jet fuel exposure in the Nordic countries.

The thesis employs a mixed-methods approach. The quantitative approach studies the effect of jet fuel price changes on the airline stock returns in the Nordic carriers. The jet fuel exposure is studied using a multivariate regression analysis that estimates Nordic countries listed airlines’ stock returns’ sensitivity to jet fuel price changes. The data used includes the stock prices and jet fuel prices gathered from Datastream database. The qualitative approach focuses on how the airlines have managed their fuel price risk in a multi-year context. The qualitative data is gathered from the airlines’ financial statements and an interview of an industry practitioner.

The results are mixed in terms of exposure. Two of the carriers exhibited statistically significant exposure where as two did not. The low-cost carrier with the least systematic and trivial hedging policy had the highest exposure. Most of the airlines employed a mixture of derivatives instruments in their jet fuel hedging with swaps and options being the most common. Typically, they where over-the-counter with jet fuel as the underlying commodity. Operational hedging was also widely used and relied on fleet renewal, fitting planes with lighter seats, and other operational procedures, such as flying at an optimal altitude. The airlines that where the most systematic in the hedging over the period did not exhibit significant exposure over time which implies that systematic hedging may in fact lessen the jet fuel exposure.