Minimum requirements for worker status and discrimination towards foreign workers : is it a real problem? 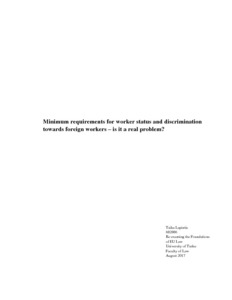 In this dissertation is examined the free movement of workers in the EU. Workers moving in the EU get benefits based on the article 45 TFEU, that other moving EU Citizens are not entitled to. The moving worker shall not cause an excessive burden for the receiving Member State. Closely linked to the principle of free movement of workers is the principle of non- discrimination on grounds of nationality. When the discrimination is objectively justified, a Member State can legally hinder the movement of foreign EU workers.

The right for workers to move within the EU is originally developed to benefit the employers and the economic movement within the EU. Workers from Member States with high unemployment of highly educated people could work in other Member States with a lack of qualified workers. During the latest years there has been increased criticism against EU and moving persons within the EU. Moving workers are often called welfare tourists, being accused for abusing the system. The new trend is also seen in the fresh ECJ decisions. From the beginning the general ambiance has been moving-friendly, but lately the ambiance has taken a turn and is becoming more hostile. In the dissertation old and new law cases are examined, so that this new trend can be observed.