Peripheral Attraction : The Formation of Adult Fandoms around American Animation for Children and Adolescents 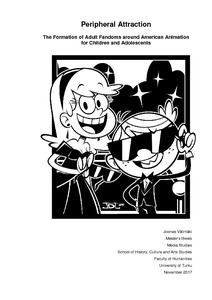 Animation is at times stigmatized as being children’s entertainment, although if we look at the history of American animation, for example, we will find out that children have been just one audience among others since the days of Winsor McCay’s vaudeville performances in the 1910s. It is this background as well as selected works from animation, audience and fan studies that serve as the historical, theoretical and methodological framework for my thesis.

I have carried out my study by focusing on a specific fan collective of the American cartoon series of my choice (Chris Savino’s The Loud House; Nickelodeon, 2016–). The community resides at a subsection of Reddit, titled /r/theloudhouse. With the permission from the moderators, I conducted a voluntary survey consisting of five, thematically arranged sections dealing with subjects like the show itself, being a fan and part of the /r/theloudhouse community, other animation and attitudes towards animation and its audiences. In the end, I received filled-out questionnaires from six volunteers.

My findings from the gathered material show, that the fans of The Loud House are passionate about their favorite show, but in general appear to lack some of the usual traits of fanness, such as active participation in community interaction, creation of fan works and display of fanness in public, such as purchasing show-related merchandise. For them, the most important thing about being a fan is to simply watch and enjoy The Loud House. Regarding my research question, I noticed that adult fans of children’s animation may choose to reject adult animation because of the very elements distinguishing it from animation for younger audiences. They do not necessarily want to watch something that caters towards their age group, and may consider “adult” and “mature” jokes and topics to be anything but, while still relating to narrative elements in children’s show even outside nostalgia.

I recommend conducting further studies on the aspects of subtexts and sound in children’s animation, since they were mostly marginalized in this study.