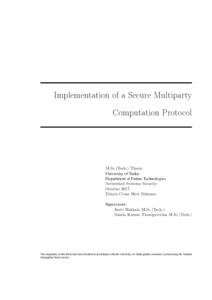 Secure multiparty computation (SMC) allows a set of parties to jointly compute a function on private inputs such that, they learn only the output of the function, and the correctness of the output is guaranteed even when a subset of the parties is controlled by an adversary. SMC allows data to be kept in an uncompromisable form and still be useful, and it also gives new meaning to data ownership, allowing data to be shared in a useful way while retaining its privacy. Thus, applications of SMC hold promise for addressing some of the security issues information-driven societies struggle with.


In this thesis, we implement two SMC protocols. Our primary objective is to gain a solid understanding of the basic concepts related to SMC. We present a brief survey of the field, with focus on SMC based on secret sharing. In addition to the protocol im- plementations, we implement circuit randomization, a common technique for efficiency improvement. The implemented protocols are run on a simulator to securely evaluate some simple arithmetic functions, and the round complexities of the implemented protocols are compared. Finally, we attempt to extend the implementation to support more general computations.