A dichotomy dismantled : reflections on National Identity among supporters of third force political parties in Taiwan 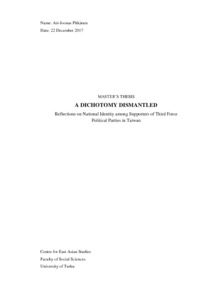 Based on a theoretical background of social constructionism and interdependence in international relations, this thesis uses secondary research to explore the history and contemporary developments of Taiwanese identity and primary research through qualitative semi-structured interviews with Third Force supporters, complemented by an interview with a Third Force politician. The national identity of the interviewees is examined through qualitative content analysis. Additionally, the study includes the author’s personal field observations from Taiwan in 2016–17.

The results indicate that Third Force supporters construct their identity through democratic civic values. Thus, their rejection of Chinese identity arises from the lack of similar values in China. This sense of identity has evolved dynamically through societal functions such as education and life experiences within the context of contested official and popular nationalisms. Owing to this identity, the Third Force supporters wish that Taiwan could become a “normal” country whose existence is not defined in relation to China. A similarly broader focus is desired in domestic politics to break the old dichotomy of the KMT and the DPP.

Through comparisons with earlier research, this study proposes a model of national identity among Third Force supporters. It depicts a civic community that governs a multitude of ethnicities, political actors, and international networks grounded in shared civic values. Adherents to this model reject ethno-nationalism and the dichotomous struggle between Taiwanese and Chinese identities by asserting an inclusive and flexible yet overtly Taiwanese civic identity. Further research should be conducted to establish the validity of this model and its relation to Taiwanese society in general.