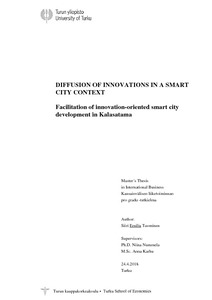 Increased urbanisation has raised various challenges which affect the economic and environmental sustainability of cities around the world. The concept of smart cities has emerged as an urban development model focusing on finding solutions to these challenges. Smart cities are often characterised by the utilisation of ICT and focus on issues such as creativity, innovation, and democratic participation processes which are expected to contribute to the creation of cities that foster sustainability, innovations, citizen-driven and citizen-centric governance, and business-led urban development. Innovations are often viewed as key ingredients of smart cities. However, while cities as environments can be viewed as advantageous platforms for innovations to flourish, the existing infrastructure, resources, and governance structures of cities can also hinder innovation-based smart city development.