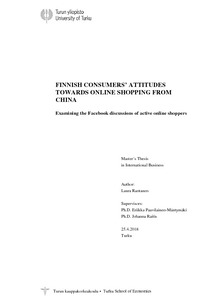 Ordering from Chinese online shops has become increasingly popular among Finnish consumers, and the phenomenon has been discussed in the media frequently, but it has not been widely researched. However, consumers’ increased interest in ordering from China has its downsides, such as environmental impacts and new challenges in competitive conditions. This study aims thus to understand the attitudes Finnish consumers have towards the phenomenon, focusing especially on consumers who are active online shoppers. The purpose of the study is divided into three sub-questions: the motives consumers have for online shopping from China, the role of herd behavior in online shopping, and the consumers’ perceptions of the ethical issues related to the phenomenon.

The theoretical background of the study consists of several concepts that are closely connected to the topic, including motives for online shopping, mobile shopping, buying decision process in online shopping, online impulse buying, herd behavior, electronic word of mouth (eWOM), and the ethical issues. Furthermore, a model demonstrating the connections between the concepts was created. The research method used in this study was a qualitative content analysis of 15 Facebook discussions. The data was collected from October to November 2017 and January 2018 from a Facebook group targeted to Finnish consumers interested in online shopping.

The results indicate that Finnish consumers have both utilitarian and hedonic motives for online shopping from China, price and convenience being among the most common motives. Besides, in consequence of the low price level, motives such as the suspense factor related to online shopping from China and tendency to make impulse purchases have an important role as well. Moreover, it can be argued that online shopping from China may become a compulsive habit or even an addiction for some consumers. The role of herd behavior should not be underestimated either, as the study found that electronic word of mouth (eWOM), especially other consumers’ product recommendations, influences the buying decisions and might also lead to impulse buying. Another way in which herding is visible is how differing opinions are “moderated” by the group members. Regarding the ethical issues, the study found that consumers use different guilt management techniques, especially the use of positive emotions and minimizing net impacts, in explaining their online orders. In addition, it can be stated that an attitude-behavior gap, that consumers’ ethical choices are often characterized by, is noticeable in online shopping from China, as the consumers’ ethical attitudes towards the phenomenon do not necessarily translate into actual behavior.