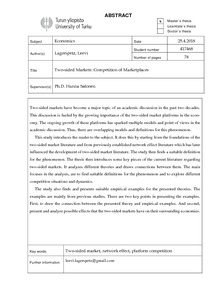 This study introduces the reader to the subject. It does this by starting from the foundations of the two-sided market literature and from previously established network effect literature which has later influenced the development of two-sided market literature. The study then finds a suitable definition for the phenomenon. The thesis then introduces some key pieces of the current literature regarding two-sided markets. It analyzes different theories and draws connections between them. The main focuses in the analysis, are to find suitable definitions for the phenomenon and to explore different competition situations and dynamics.

The study also finds and presents suitable empirical examples for the presented theories. The examples are mainly from previous studies. There are two key points in presenting the examples. First, to draw the connection between the presented theory and empirical examples. And second, present and analyze possible effects that the two-sided markets have on their surrounding economies.