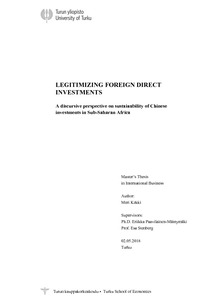 Chinese FDI operations in Africa have caused intense discussion in terms of sustainability and ethics. The investments made by the Chinese companies have been both criticized and encouraged in the public discussion. Still, little attention has been paid to the discussion itself and the meaning-making processes around the concept of sustainability. This study focuses on that specific dialogue, underlining the perspectives of the discussion and the rhetoric devices used for arguing those perspectives. The objective is to find out what (de)legitimation strategies are used in newspaper articles around the discussion and how does the legitimation differ in the Chinese media and in the Western media. The perspectives presented in the articles of the newspapers are compared to legitimation categories introduced by Van Leeuwen (2007): authorization, rationalization, moral evaluation and mythopoesis.

Altogether 31 news articles were read and analyzed from six well-established newspapers using critical discourse analysis. Both Chinese and Western newspapers were chosen and their content was mirrored against Van Leeuwen’s (2007) framework of legitimation. The study revealed that rationalization and authorization were the most commonly used (de)legitimation strategies, whereas mythopoesis was used the least. The Chinese newspapers used these two strategies more than the Western papers. Still, the Chinese media as a whole did not represent a remarkably different reporting than the Western media in terms of (de)legitimation, although one Chinese newspaper stood out in its reporting style. Four commonly appearing legitimation themes were extracted from the media texts: economic rationale, expert repeal, personal experience and moral mirroring. It is argued that these themes are likely to appear in sustainability discourses more generally.

The findings of the study supported the conclusion that the discourse itself largely shapes our understanding of sustainability. Because discourses create social meanings, discussions about sustainability and corporate social responsibility are highly involved in creating the understanding of what the concepts constitute of. This conclusion helps understand the complex nature of sustainability: the concepts are largely based on the already existing constructions of values and worldviews, and the discussion produced around it shifts the perception of the concepts to one direction or another. In order to validate their investments, companies and their executives need to be aware of the various discourses defining sustainability. Without this knowledge, the reputation of the business can suffer even if the company aspires to follow theoretical sustainability guidelines. Ultimately, this understanding enables a more efficient and sustainable integration of Africa’s developing countries into the world economy.