Accentuate the positive : Hope as psychological capital in Futures Studies

Accentuate the positive : Hope as psychological capital in Futures Studies 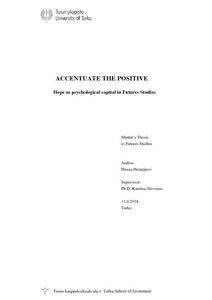 Hope is an inherently futures-oriented concept: it can only be targeted towards the future because the present moment and the past are beyond our influence. Its timescale, complexity, and certainty may vary, but hoping is always targeted towards the future. Despite of this, discussion on hope has been lacking in the field of Futures Studies. This thesis seeks to discuss hope in the context of Futures Studies and understand where hope comes from and if it could be instrumentalized as a tool for Futures Studies. The first research question is what different manifestations of hope are present in the research material, and what do they express about futures orientation. The second question seeks to understand how these manifestations of hope act as psychological capital. The third research question asks if the psychological capital can be instrumentalized as a tool for Futures Studies to empower people as active agents in their own futures.

The theoretical framework consists of three major theories: Anita Rubin’s images of the future, C.R. Snyder’s hope theory, and Luthans et al.’s psychological capital. The research material was a survey on hope done in collaboration with Suomalaisen Kirjallisuden Seura (SKS, the Finnish Literature Society) 1.4.-31.8.2017. The survey was a memory collection in which SKS announced the topic, some general guidelines, and assisting questions, and anyone was free to submit their answers. As a research method grounded theory was used in which a social process is explained by formulating a theory from qualitative material.

The study analysed how people understand hope and what significance it held for them. There are as many opinions on hope as there are people, but hope can be summarised as a construct in which a positive image of the future is conjured and maintained through the belief that the image can become reality through the actions of the individual. The theoretical framework of images of the future, hope theory, and psychological capital were combined into a new model of hope capital, which consist of personality traits, optimism, pathway thinking, and futures orientation. This tool is meant to ease the discussion of hope in Futures Studies context. High hope capital is connected to the ability to conjure preferable futures images, and by affecting hope capital also actions can be affected.