A developing economy as a part of global value chain : The apparel industry and poverty reduction in Nicaragua

A developing economy as a part of global value chain : The apparel industry and poverty reduction in Nicaragua 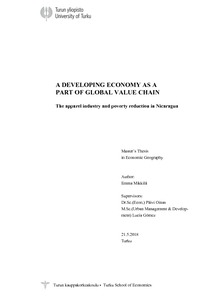 Apparel industry is one of the biggest consumer industries in the world and it has a significant footprint on environment, employment and economy. The industry continues to grow and the clothes are produced and consumed cheaper and faster than ever before. Most of the global apparel is produced in developing economies with low production costs and consumed in global north. In the global value chain of an apparel product, most of the value is produced in global north, such as research and design, sales and marketing. Usually the least value creating production phases are conducted in global south, such as production of raw material and sewing.

This is a qualitative research and answers to the research questions were sought partly through desk research and increased understanding was gathered from four interviews. The interviewed experts represented a non-governmental organization that works with factory workers especially in apparel industry, a doctor of economics, a representative of ProNicaragua which aims to increase the number of foreign investments in the country, and a General Secretary of a workers’ union. Earlier literature and researches, such as a publication of Maquila Solidarity Network deepened the analysis.

Apparel industry forms a significant part of the country’s exports and formal employment. A job in an apparel factory is probably better work than an alternative. Apparel industry creates a significant number of formal employment in a country with a big and young work force and a big informal sector. However, the salary does not cover the basic living cost and therefore it is not sufficient to lift a worker out of poverty. The foreign investments should also create more backward and forward linkages to local actors. The factories are often located in Free Trade Zones and they have few linkages to other actors in the country. Improving these linkages could boost learning and technology spill overs to other actors and local firms.