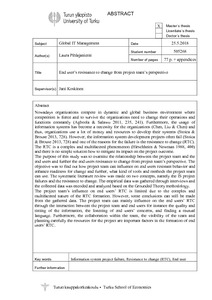 Nowadays organizations compete in dynamic and global business environment where competition is fierce and to survive the organizations need to change their operations and functions constantly (Agboola & Salawu 2011, 235, 241). Furthermore, the usage of information systems has become a necessity for the organizations (Chen, Liu & Chen) and thus, organizations use a lot of money and resources to develop their systems (Stoica & Brouse 2013, 728). However, the information system development projects often fail (Stoica & Brouse 2013, 728) and one of the reasons for the failure is the resistance to change (RTC). The RTC is a complex and multifaceted phenomenon (Hirschheim & Newman 1988, 400) and there is no simple solution how to mitigate its impact on the project outcome.
The purpose of this study was to examine the relationship between the project team and the end users and further the end users resistance to change from project team’s perspective. The objective was to find out how project team can influence on end users resistant behavior and enhance readiness for change and further, what kind of tools and methods the project team can use. The systematic literature review was made on two concepts, namely the IS project failures and the resistance to change. The empirical data was gathered through interviews and the collected data was encoded and analyzed based on the Grounded Theory methodology.
The project team’s influence on end users’ RTC is limited due to the complex and multifaceted nature of the RTC formation. However, some conclusions can still be made from the gathered data. The project team can mainly influence on the end users’ RTC through the interaction between the project team and end users for instance the quality and timing of the information, the listening of end users’ concerns, and finding a mutual language. Furthermore, the collaboration within the team, the visibility of the team and planning carefully the resources for the project are important factors in the formation of end users’ RTC.