From a ‘Science of Love’ to ‘Putting feet to Christianity’ : Constructing Intimacy in Secular and Christian Versions of Relationship Manuals

From a ‘Science of Love’ to ‘Putting feet to Christianity’ : Constructing Intimacy in Secular and Christian Versions of Relationship Manuals 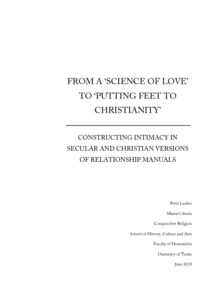 This Master’s thesis compares how the emotional programme of intimacy changes when a secular self-help relationship manual is adapted for Christian couples. The contents and construction of the emotional programmes are compared using qualitative analysis. The topics of the comparative analysis include the covers of the manuals, metaphors, spiritual outlook, explanatory models, modalities of knowing, values, exercises and construction of intimate relationships.
The adaptation has a significant impact on the tone and scope of the emotional programme. Especially the introduction of God as a super-social relationship changes the orientation of the emotional programme towards the mystical. The object of relationship repair changes from improving human intimate relationships by therapeutic interventions to repairing the relationship between man and God, even experiencing and expressing God’s emotions. The underlying core of theory and practice, however, does not change much. It is functionally preserved while being wrapped inside Christian rhetoric.
The findings are situated in the context of other self-help relationship manuals, and the tension between the relationship ideals of autonomy versus dependency is discussed. The relevance of these findings to conceptualizations of individualism, commitment and therapeutic culture are considered.
Sue Johnson’s relationship manuals are an instance of cultural hybridization that offers a solution to the cultural contradiction between the conflicting demands of individualism and commitment. Critiques of the therapeutic often claim that it is therapeutic language that makes commitment impossible. It is argued that already the fundamental commitment to individualism is enough to make commitment difficult, even without the help of the therapeutic attitude. Johnson does not relinquish the fundamental value of individualism, but offers a solution highlighting the value of commitment both for the secularly inclined as well as for those already committed to a Christian value system.