English as a Medium of Instruction : Benefits and Challenges as Viewed By Founders of International Schools in Ethiopia 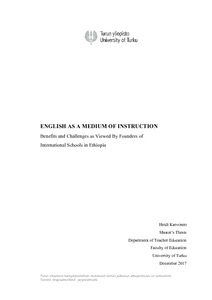 This research explores the benefits and challenges of using English as opposed to a local language as a medium of instruction as viewed by founders of two private international schools in Ethiopia. While mother tongue-based learning is strongly advocated, specifically in the African context, and the educational policies of Ethiopia in this regard are recognized as the most progressive on the continent, there are several gaps between policies and implementation. One such gap that remains unaddressed and under-researched is English as a choice of the medium of instruction in a widely esteemed growing number of private international schools. This study gives a preliminary impetus for doing further research and addressing this gap, which can easily be overlooked due to the relatively greater academic success of international private school students. These students are in the minority, and are not primarily the concern of the government, but rather of the private school owners. The choice of medium of instruction in these schools certainly influences their students learning, but also the wider community.

The benefits identified can be achieved even if English is taught as a second language as long as better materials and curricula are developed in the local language and culture. Most importantly, according to earlier research the challenges identified could largely be overcome by using the mother tongue as the medium of instruction. This area should definitely be researched further and more widely to identify the underlying factors regarding the choice of the medium of instruction in private international schools and ultimately to re-examine the choice itself.