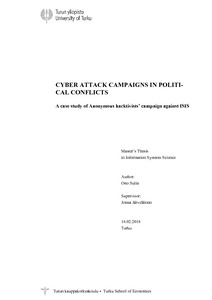 Cyber-based conflicts are a natural consequence of our lives, society and business moving more and more to the Internet. They are conflicts like any other politically or socially motivated conflict known to date. At the same time, they do behave differently as they are conducted on the Internet and the physical location of actors might change rapidly, be very distributed or even irrelevant.

In this study, cyber conflict is studied as a socio-political conflict that can be broken into phases that follow and affect each other. Carr’s (2011) Cyber Early Warning Model and Grant et al.’s (2015) canonical model of offensive cyber operations were chosen as tools for analyzing the cyber conflict between Anonymous and ISIS, as it erupted into larger scale after Paris attacks in November 2015. The conflict is analyzed as a case study of how a cyber conflict could play out and be broken into phases for analysis. The study goes into details to identify and categorize different methods hacktivist collective Anonymous used in its campaign against ISIS by using the previously mentioned process models.

During the campaign, Anonymous used a wide range of methods for both discovering targets and conducting the subsequent cyber attacks. The activity was quite focused on ISIS’s social media presence, which Anonymous aimed to take down using automated tools that recognize ISIS affiliated content. Hacking and conducting Denial of Service attacks on websites were also employed methods. The effectiveness of Anonymous attacks cannot be discerned from the research material, but the wide interest towards participating in the previously mentioned activities was clear, especially from French speakers.