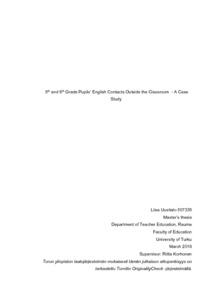 The aim of this case study is to examine the quality and quantity of 5th and 6th grade pupils’ contacts with the English language outside the classroom. Results are based on pupils’ own perceptions and feelings about their English contacts and learning English outside the classroom. The theory part of this thesis covers such matters as second language acquisition, implicit learning and the role of English language in Finland.
The study was conducted in a small school in Southwest Finland with semi-structured interviews. All 13 students from grades five and six were interviewed in the spring of 2017. The transcribed interviews were analysed and placed under different themes.
The results indicate that the most common contacts with the English language among this group of pupils were Youtube, electronic games and using English with Finnish-speaking friends. Just over half of the pupils claimed they encountered English contacts daily, but encountering was mainly exposure to the language, not speaking. All the interviewed pupils felt they learned English from these outside the classroom contacts.
Keywords: English contacts, implicit learning, second language acquisition, self-evaluation