Counterreligion? The Church of the Flying Spaghetti Monster and Shifting Discourse on Religion 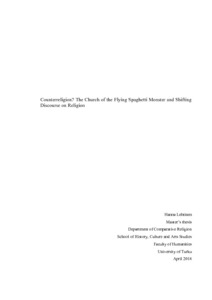 This study discusses a movement called the Church of the Flying Spaghetti Monster(CFSM), also known as Pastafarianism. Pastafarianism was born in the United States in 2005. It has since grown to a global phenomenon with numerous communities active both online and offline. While Pastafarianism is generally considered a parody religionor an Atheist satire criticising privileges awarded to religion in society, its open-endedness and subtle balance between different discourses on religion (and non-religion) make it open for many kinds of interpretations and uses. In this study, Iexamine the way Pastafarians construct their movement discursively, how they negotiate the categories of ‘religion’ and ‘atheism’, and how they locate Pastafarianismin relation to these two categories. I examine the way this movement is taking part in discourses that question the widely accepted categorisations and boundaries of‘religion’. As research material I examine the writings of Bobby Henderson on his Pastafarianism-dedicated website The Church of the Flying Spaghetti Monster and written interview responses I have received from numerous Pastafarians in different European countries. My study sheds light on the way Pastafarians creatively mix and use different discursive strands on religion and produce an elusive, potent tool for both questioning and maintaining certain cultural category boundaries concerning religion and non-religion. I also examine whether the concept of counterreligion would be useful analytical tool in describing this process.