Crowdfunding as an International Marketing Tool

Crowdfunding as an International Marketing Tool 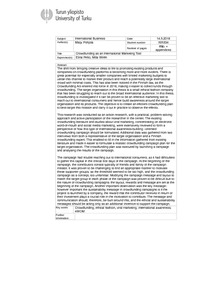 The shift from bringing creative ideas to life to promoting existing products and companies on crowdfunding platforms is becoming more and more evident. There is great potential for especially smaller companies with limited marketing budgets to utilise this channel to market their product and reach a potentially large international crowd with minimal costs. This has also been noticed in the Finnish law, as the Crowdfunding Act entered into force in 2016, making it easier to collect funds through crowdfunding. The target organisation in this thesis is a small ethical fashion company that has been struggling to reach out to the broad international audience. In this thesis, crowdfunding is investigated if it can be proven to be an effective marketing tool to reach out to international consumers and hence build awareness around the target organisation and its products. The objective is to create an efficient crowdfunding plan to best target this mission and carry it out in practice to observe the effects.

This research was conducted as an action research, with a practical, problem-solving approach and active participation of the researcher in the center. The existing crowdfunding literature and studies about viral marketing, concentrating on electronic word-of-mouth and social media marketing, were extensively reviewed to form a perspective of how this type of international awareness-building –oriented crowdfunding campaign should be formulated. Additional data was gathered from two interviews from both a representative of the target organisation and a Finnish crowdfunding expert. This enabled to fill in the information gathered from existing literature and made it easier to formulate a realistic crowdfunding campaign plan for the target organisation. The crowdfunding plan was executed by launching a campaign and analysing the results of the campaign.

The campaign had trouble reaching out to international consumers, as it had difficulties to gather the capital in the critical first days of the campaign. At the beginning of the campaign, the contributors consist typically of friends and family of the campaign initiator. It was proven to be challenging to find an appropriate manner to motivate these supporter groups, as the threshold seemed to be too high, and the crowdfunding campaign as a concept, too unfamiliar. Modifying the campaign message and layout to match the target group in each phase of the campaign was proven to be difficult due to the nature of crowdfunding campaigns: the layout, rewards and message are set at the beginning of the campaign. Another important observation was the key message: however important the sustainability message in crowdfunding campaigns is if the project is launched by a company, the reward that the contributor receives in return of their investment plays a crucial role in the motivation to contribute. The message and communication should, therefore, be built around this, and the ethical and sustainability messages should be acting only as an additional incentive to support the campaign.