History of Escape Games : examined through real-life-and digital precursors and the production of Spygame

History of Escape Games : examined through real-life-and digital precursors and the production of Spygame 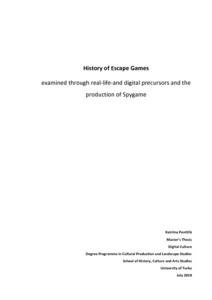 The focus of this master’s thesis is on forming an image of history of modern escape games based on real world-and digital precursors of this genre of games and on recording what escape game phenomenon is like in late 2010s, roughly a decade after these games first started appearing. The research is based on previous work on the topic mostly by Dr. Scott Nicholson, to which I add my own insight and build a broader, more in depth portrayal of the history through presenting examples of each precursor and linking the precursor’s features to features of modern escape games.
The most important academic background of this thesis is Dr. Scott Nicholson’s white paper Peeking behind the locked door: A survey of escape room facilities (2015). Other academic background of this thesis comes from research regarding the different precursors and from the field of game design, such as Fundamentals of Game Design (2010) by Dr. Ernest Adams. Since the history of escape game genre has to my knowledge not been researched and recorded to this extent earlier, a big part of the references used in this thesis consists of non-academic sources: escape room related websites, -blogs-posts and -videos, which I used to collect and analyze information.
I use the production of Spygame, which is a modern escape game with influences of especially interactive theater, as a case study to illustrate ways the history of escape games can be concretely seen in modern escape games. I worked as the project manager in the production of Spygame in 2017 and hence have access to large amount of unique data regarding the production of the game, including notes from game testings, internal emails, notes from game development meetings etc. I analyze this data and connect the history with this modern game through examples of how the influences of history can be seen in our game design choices and expectations of the game testers.
According to Nicholson, precursors of escape rooms include live action role-playing, point-and-click adventure games, puzzle- and treasure hunts, interactive theater and haunted houses, adventure game shows and themed entertainment industry. I divide the precursors to digital-and real-life precursors and add themed restaurants, team building activities, pervasive games and alternate reality games to this list of precursors of escape rooms. I also state that the escape room-name of these games likely originates from digital escape-the-room games, which is a sub-genre of point-and click adventure games.