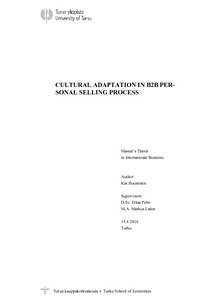 Personal selling is an important part of marketing communications in business-to-business field. It is heavily affected by cultural differences when talking about international sales since personal selling is done between people in the seller and buyer organization. It is also highly dependent on relationship between the two parties. How is personal selling then adapted on a tactical operations level when and if cultural differences arise?
This study is investigating how the sales people adapt the personal selling process and its stages to different cultural differences. The differences are based on previous cultural research in a wide perspective taking into consideration the cultural features that arose in the empirical part of this research. The goal is to gain more overall knowledge about the phenomenon in descriptive format instead of testing existing theory since the subject is not much researched in this context. The empirical part was conducted by 7 interviews in 2 countries making sure that most areas of the cultural world was covered to be able to make comparisons between the cultures.
The results showed that there are factors that need adaptation in certain cultures during the personal selling process, but there were also major differences between the steps. Some require more adaptation than others, but in general the steps were there are most contacts with the customer and in cases where the target market is culturally more distant from the home market. This researcher brought up important tactical information for sales people to use in their work, such as culture specific time conceptions and communication habits.