Consumer behavior towards adoption of E-commerce in Pakistan 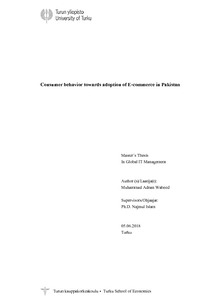 Though many companies are still just beginning to grasp the potential uses and impacts of the Web and e-commerce, advances in technologies and their application continue. Extensive usage of mobile applications supported by smartphones has changed the ecommerce world and customer behavior has totally changed compared to a decade ago regarding online shopping. This study has been done specifically to Pakistani market and the focus of this study is to investigate the factors that satisfies or dissatisfies the end-users who are relatively new to eCommerce. The study attempted to explain which factors generated satisfaction and dissatisfaction in target country’s ecommerce sector.

The study concludes that the mindset of the end-users in context to online shopping is still in its infancy. Several factors have been found which proved to be the critical success towards accelerating consumer adoption towards ecommerce including lower prices, improved security, improved devices and effective customer support. It was also observed that the customization of the marketing mix to the specific characteristics of each target market is a key success factor for eCommerce in Pakistan.​