THE EFFECT OF BREXIT ON THE STRATEGIC CHOICES OF FINNISH COMPANIES OPERATING IN BRITAIN : The uncertainty strikes back

THE EFFECT OF BREXIT ON THE STRATEGIC CHOICES OF FINNISH COMPANIES OPERATING IN BRITAIN : The uncertainty strikes back 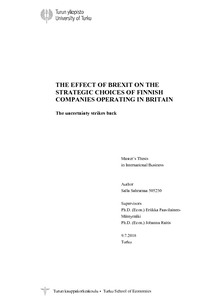 In June 2016 a referendum was held in which the British people made a decision that shook the world. This unprecedented decision leads Britain to exit the European Union in March 2019 leaving Britain to renegotiate everything ranging from the actual exit mode to tariff quotas and immigration policies. This incident is commonly known as Brexit. Its effects are large scale; it directly affects the lives of many people, but also companies are forced to reevaluate their strategies because of the unexpected nature of this market disruption. Hence, the situation is optimal for strategic management research and the research question of the thesis is what kind of strategic decisions UK-based Finnish companies make because of Brexit.

The author concluded that the most suitable method for the study is of qualitative nature; the qualitative case research was conducted by executing semi-structured interviews on CEOs or CFOs of four Finnish companies that operate in Britain. The results were very similar in all of the interviews; the increased uncertainty has the biggest effect on businesses and their strategic decisions. Companies are waiting what shape Brexit will take and act accordingly. The study is an inductive one, so the results defined the theoretical framework of the thesis. The underlying theories are strategic change management and management of uncertainty, and as the sub-questions contain market exit willingness of the companies, aspects on market exit and market exit barriers are included. Also, modes of execution of Brexit and market regulations as an opportunity or threat are discussed in the theoretical framework.

Main conclusions in the thesis are that companies are on a waiting mode and are practicing more adaptive and reactive strategies, which can be the consequence of the interviewees questioning if Brexit will happen at all. Market exit willingness was also only speculated; it depends on the Brexit mode of execution, whether Brexit will be executed as “hard” or “soft” Brexit. The interviewed companies were also found to have a low level of strategic preparedness for market disruptions and not many opportunities were distinguished regarding Brexit, merely threats have manifested. As strategic indecisiveness can be perceived, the results of the thesis might have been different, if the study was conducted later on in the Brexit negotiations or after the actual exit.