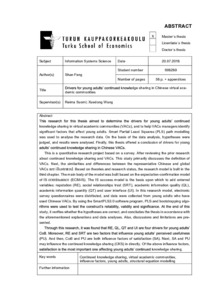 This is a quantitative research project based on a survey. After reviewing the prior research about continued knowledge sharing and VACs. This study primarily discusses the definition of VACs. Next, the similarities and differences between the representative Chinese and global VACs are illustrated. Based on theories and research status, the research model is built in the third chapter. The main body of the model was built based on the expectation-confirmation model of IS continuance (ECM-IS). The IS success model is the basis upon which to add external variables: reputation (RE), social relationships trust (SRT), academic information quality (QL), academic information quantity (QT) and user interface (UI). In this research model, electronic survey questionnaires were distributed, and data were collected from young adults who have used Chinese VACs. By using the SmartPLS3.0 software program, PLS and bootstrapping algorithms were used to test the construct’s reliability, validity and significance. At the end of this study, it verifies whether the hypotheses are correct, and concludes the thesis in accordance with the aforementioned explanations and data analyses. Also, discussions and limitations are presented.