MAY A GOD BLESS THE UNITED STATES OF AMERICA : Critical discourse analysis of the relationship between religious beliefs and politics in Bush’s and Obama’s discourses about the fight against terrorism 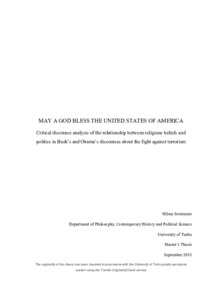 The United States presents an interesting topic for the discussion about secularism in the West, as it is sometimes considered as an anomaly amongst secularising Western nations and as evidence of the failings of the secularisation theory. The influence of religion on the culture and political life of the U.S. is well known, but the relationship between religion and U.S. foreign policy has not gained much scholarly attention until the 21st century.
This study participates in the discussion about the relationship between religious beliefs and U.S. foreign policy by analysing discourses that previous U.S. presidents George W. Bush (GOP) and Barack Obama (D) construct about the fight against terrorism. The analysis is conducted using a Faircloughian three-dimensional critical discourse analysis on a total of 17 speeches from Bush and Obama. The research material consists of inaugural addresses and State of the Union Addresses.
The subject of this study is approached using a three-part theoretical framework. The theoretical framework consists of secularism, the concept of the post-secular, and the American civil religion. The three-part theoretical framework enables a comprehensive approach that allows versatile religious phenomena to be considered in the analysis. Thus, the analysis also includes versatile religious phenomena that are not straightforwardly connected to certain religions or religious groups.
The analysis revealed that Bush constructs three distinct discourses and a total of seven sub-discourses about the fight against terrorism, whereas Obama integrates the matter in a larger security-discourse and its sub-discourses. By not constructing distinct discourses about the fight against terrorism, Obama’s addresses counter the Bush administrations high profile treatment of the conflict and the narrative of it as a distinct war. Bush’s and Obama’s addresses establish a relationship between religious beliefs and the American civil religion, although in Obama’s case, the connection to religious beliefs is established chiefly in his inaugural addresses. This study argues that the presidents’ discourses indicate a post-secular relationship between religion and politics in the context of the fight against terrorism, as they do not indicate either secularism or dominant religiousness, but a relationship that accommodates both religious and secular interpretations of politics and supports a non-traditional way of relating to religious beliefs in politics.