The role of the CEO in the strategy process : Case study: a growing medium-sized recruitment company

The role of the CEO in the strategy process : Case study: a growing medium-sized recruitment company 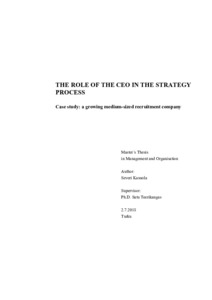 Recent strategy studies have noticed that an ideal strategy for all companies in one context does not exist and that this versatility extends to strategy processes and makes them unique every time. At the same time, the strategy research has steered more attention to micro-level practices of different actors, and practical examination rather than practical theorizing.

The strategy research of SMEs has only received a fraction of the attention compared to large enterprises and therefore has lagged behind. Especially, research which has focused on the different actors and their practices of strategy work in the SME context is very limited. The limited research in the SME context has acknowledged that a Chief Executive Officer (CEO) of an organization is usually responsible for the strategy and its formulation. However, strategy formulation is described to involve multiple practitioners.

In this study, the focus is on a certain strategy process in the SME context and on the roles of the different actors in it through their practical involvement in the process. By examining the role of the CEO and its connections to other actors and their work during the strategy formulation, this study aims to get a better understanding of the practical role of a CEO in a strategy process in the SME context.

The case study method, as well as, the methods to collect material for this study are qualified as a part of the qualitative research methods. Collection of the research material has been carried out by interviews, participatory observation and document analysis.

The findings of the research pictured the steps of the versatile case strategy process and practical involvement of all the actors. The CEO was in a role of a modern chief strategist who designed and led the process. The design of the process took the strong culture of participation into account, enabled the management of the knowledge-based resources and finally led to collective decision making. Other actors participated in the process as strategists together with the CEO. The role of the CEO was constructed through the collective nature of the process and active roles of the other actors, in both which the CEO also affected by his/her own acts.