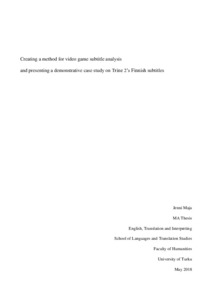 In this study, I set out to create a method for video game subtitle analysis that could benefit translation studies, especially the study of video game subtitling. I demonstrate the use of my method by conducting a case study on the video game Trine 2’s Finnish subtitles in comparison to the English original subtitles. Much of the popularity of video games can be credited to their translations, as having been translated to multiple different languages has enabled them to be marketed all around the world. However, little research on video games is done by translation studies, even though video games have become a globally popular pastime in the past few decades. I chose this topic for my study as I believed it could benefit the field of translation studies by bringing a new research topic and a practical method of research into the attention of a larger audience.

The study begins by presenting background information on both subtitling and video games, as they are the essential factors of this study. Then, the study introduces the theoretical background on which the new analysing method is based on, which is by the works of Díaz-Cintas and Remael Audiovisual Translation: Subtitling (2014) and Mangiron Subtitling in game localisation: A descriptive study (2012). Linguistic subtitle analysis by Diaz-Cintas and Remael (2014) and video game subtitling conventions by Mangiron (2012) are combined into a new analysing method for video game subtitles. The method consists of two main categories; linguistic analysis components and video game subtitling attributes. There are three linguistic analysis components: text reduction, linguistic cohesion and coherence in subtitling and segmentation and line breaks; and five video game subtitling attributes: subtitle length and duration, font: size, type colour, and background, character identification, sound effects and emotions, reduction and segmentation. The method is introduced on its own, and then demonstrated in use in the case study on Trine 2’s Finnish subtitles.