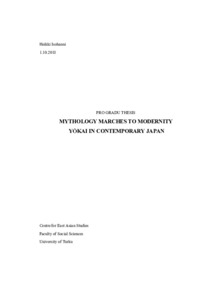 Yōkai are a class of Japanese folklore creatures that have crept to the fame of Japanese popular culture. Their past and cultural relevance has been researched intensively, but little is studied of their place in contemporary society. This thesis, using the foundation laid by folklorists and scholars of past and today, will present how yōkai are viewed by the modern Japanese and how their standing has changed from Edo-period ghost stories to modern media platforms. The research was done using both present literature and fieldwork done in Japan. From these findings it can be said that folklore and cultural belief surrounding yōkai have indeed changed, but still there exists a vast space of yōkai imagery and narratives suited for a more modern audience. Yōkai also reflect the society itself, as seen from emerging new types of narratives that exhibit problems and fears stemming from modern society.