Assessing the Role of Vocabulary Breadth and Depth in Reading Comprehension : A Quantitative Study of Finnish EFL Learners 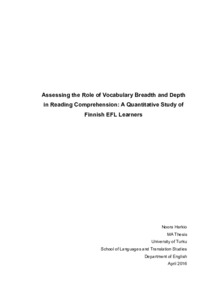 Two groups were studied: the first group consisted of 39 Finnish upper secondary school students (the TOKA group) whereas the second group consisted of 19 university students of English at the University of Turku (the YLI group). Thus, comparisons were made between the results of a less advanced and a very advanced group of English learners, which was the third aim of the study. The participants in both groups filled in a background information form and took three tests: a multiple-choice reading comprehension test, a multiple-choice vocabulary size test, and a test designed to elicit information on learners’ depth of vocabulary knowledge of certain English words. The data were analysed using statistical methods.