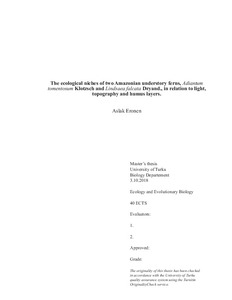 In my master’s thesis study I am studying the role of light and humus layers in niche partitioning between ferns of the genera Adiantum and Lindsaea in the Amazon rainforest understory. Soils have been shown to be among the most important factors in determining the niche space of these species and light was expected to be one of the factors affecting the microhabitats where they are occurring within forests on the same soil type.

Forest structure, light conditions and pteridophyte species communities were found to be strongly affected by topography, as was the occurrence of the focal species. Lindsaea falcata was found to occur mostly on hill slopes, possibly in more shady microhabitats than Adiantum tomentosum. The light partitioning hypothesis was supported by both direct measurements at the microhabitats and abundance data. Fertility or size of L. falcata was not affected by light. A. tomentosum was found to be the most common pteridophyte species in the study area with the species being rarer only in valley bottoms. Occurrence or abundance of A. tomentosum was not affected by the amount of light received, although light had a positive effect on the fertility of the species. A. tomentosum was also found to occur on deeper humus layers than L. falcata, which might explain why L. falcata was most common on slopes, as the slope positions seemed to contain more patches of bare soil.