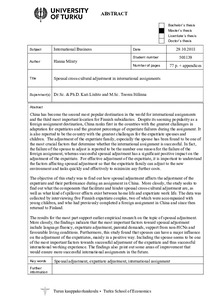 The objective of this study was to find out how spousal adjustment affects the adjustment of the expatriate and their performance during an assignment in China. More closely, the study seeks to find out what the components that facilitate and hinder spousal cross-cultural adjustment are, as well as what kind of spillover effects exist between home life and expatriate work life. The data was collected by interviewing five Finnish expatriate couples, two of which were accompanied with young children, and who had previously completed a foreign assignment in China and since then returned to Finland.

The results for the most part support earlier empirical research on the topic of spousal adjustment. More closely, the findings indicate that the most important factors toward spousal adjustment include language fluency, expatriate adjustment, parental demands, support from non-HCNs and favourable living conditions. Furthermore, this study found that spouses can have a major influence on the adjustment of the expatriates, mainly in a positive way. Including the spouse seems to be one of the most important factors towards successful adjustment of the expatriate and thus successful international working experience. The findings also point out some areas of improvement that would ensure more successful international assignments in the future.